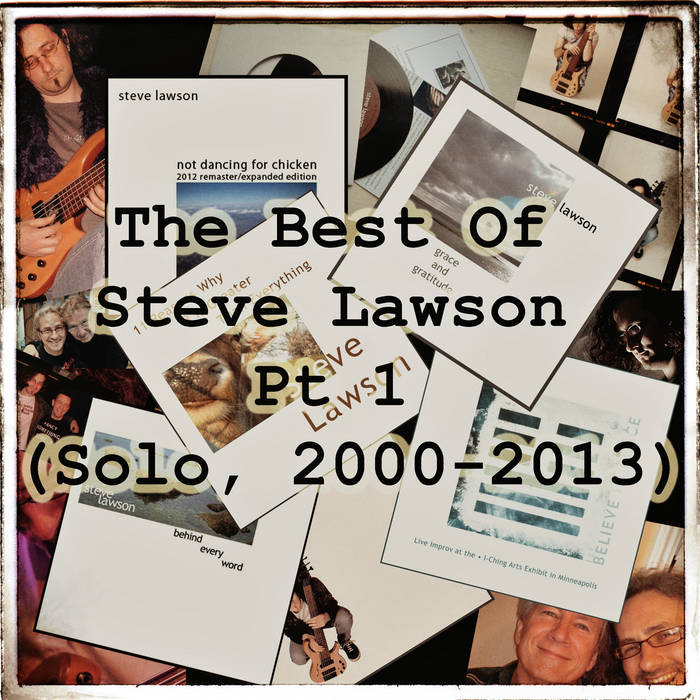 Joe Brockmeier If I close my eyes and just focus on this, I get an overall pleasant and peaceful feeling. It's ethereal and engaging, meditative but not boring. Really beautiful. Favorite track: No More Us And Them.

juledude It is just a beautiful day, Steve.

Thank you for sharing your heart.

Brendan Sean Piroué Both a brilliant introduction to the world of Steve Lawson, and a key record for those who wish to throw back to his earlier days Favorite track: Nobody Wins Unless Everybody Wins.
more...

This compilation is LONG overdue.

Back in 2013, a conversation started on Twitter about me needing a best of compilation. I said something to the effect that I didn't know what I'd put on it, and the two friends that I was talking about it with - Mike and Tom, offered to sort it out between them. They are both intimately acquainted with the bulk of my catalogue, and certainly back in 2013 when it was considerably smaller than it is now, were in a far better position that I was to put together an album that showcased the best of what I'd done up to that point.

Somewhere in that timeline, Tom also put together a set of photos - one for each track, that on here form the individual track artwork. They're beautiful photos and offer another take on the stories that have clung to these tunes since they were recorded - some of them told in concert, some in blog posts, some lost in time. Tom's beautiful photos offer another glance at what these tunes might mean. By his own admission, he's not sure what guided his choices back when he did it in 2013, but from here, 6 years on, I'm finding a whole lot to enjoy in juxtaposing them with their chosen tracks!

So why put out an album of stuff from my first 13 years now? For me, this represents an introduction to what I sounded like before The Big Change. TBC was when I introduced percussion and keys to my live solo set up via the Quneo controller. That happened in mid 2015, and coincided with the beginning of my Bandcamp Subscription service which changed not only the release mechanism for my music, but also the entire framing of what was considered release-worthy. I was no longer constrained by the artificial scarcity of a normal record release schedule and could instead release albums episodically.

These tracks all stem from a simpler time, when albums were released on pretty much an annual basis, were promoted and marketed via the more regular outlets of magazines and radio, blogs and social media.

Below is the public conversation and Google doc annotations that Mike (@MikeKSmith) and Tom (@DancingMonk) had on Twitter about the tracks as they were compiling the list (the limits for the project were that I wanted to be able to release them on CD if needed).

I'm deeply indebted to both of them for the work and time they put into this (and into Part 2 which will be out soon!) - they've both been a source of friendship, support and valued critique on my work for two decades. For that I'm immensely grateful.

Behind every word - Nobody wins unless everybody wins
@MikeKSmith - A slow builder. Expansive. Steve’s music is a reaction or commentary on life, issues, politics etc. This says “optimism + realism” to me.
@DancingMonk - A beautiful example of how to build layers of increasing complexity & beauty over a simple foundation

Grace and gratitude - shizzle
@MikeKSmith - “Get lucky” long before Daft Punk thought of it. This track made Level 42 fans happy when Steve supported them on tour.
@DancingMonk - Let's get funky but I'll relax in the corner over here

Behind every word - Me, myself and I
@MikeKSmith - The darker side of “Shizzle”. Brooding and tense, this takes the funk and turns it back on itself, oppressive. Searing.
@DancingMonk - Paddling like mad while presenting a calm face to the world

Not dancing for chicken - no more us and them
@MikeKSmith - Back towards the light, the contemplative, wistful side of Steve’s playing. Celebrating diversity and unity instead of divisiveness.
@DancingMonk - Calm, contemplative and reflective with just enough movement to stop you falling asleep

Grace and gratitude - grace and gratitude
@MikeKSmith - What do you have to be grateful for? You get what you deserve. Or sometimes you don’t. And that’s a good thing.
@DancingMonk - Sinuous tangles through languid pools

Live so far - The kindness of strangers
@MikeKSmith - Live looping is treacherous. I’ve seen Steve cock this up more than once. The feet dance. Left turn at the lights and straight on till morning.
@DancingMonk - Perhaps we can play this on the bus to encourage a more relaxed journey. Oh it's a wonderful world.

and nothing but the bass - The Virtue of the Small
@MikeKSmith - This early track set out Steve’s stall for me. 20 years on, good things can still come in small packages. What promise! As Peel might have said “Fades out suddenly”
@DancingMonk - the Bass is really just a tenor guitar & you can do so much more with it - yay for the Bass

11 reasons… - Small marvels
@MikeKSmith - Small is marvelous here as well. All the usual adjectives apply, but add space and time to reflect. Don’t rush it.
@DancingMonk - simply & steadily driving to your destination (the autocorrect suggested Destiny)

Behind every word - Jimmy James
@MikeKSmith - This tune made me cry. A tender tribute to a friend lost. A simple melody wrapped in the ghosts of half-remembered stories.
@DancingMonk - ooh soundscapes, delicious noodles & a drop dead gorgeous tune

Believe in peace - The Creative (Ch’ien)
@MikeKSmith - Energy, motion, durability, perseverance. This track takes us on a journey of metamorphosis - from things we expect to the unknown. And on.
@DancingMonk - .... and relax

Massive thanks to Mike and Tom for the work of compiling this and 6 years of regular complaining about it not yet being out ;) Better late than never!