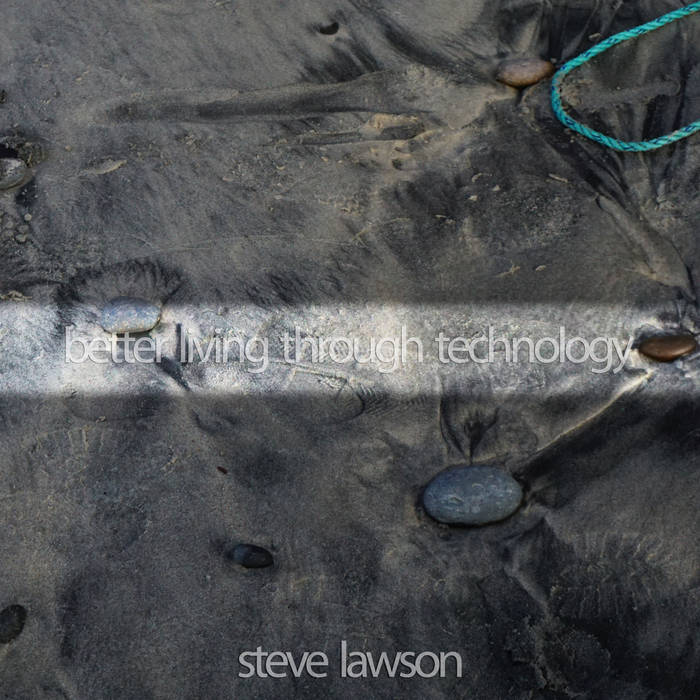 Steve Lee Certainly a show case of the musicality that a good musician can coax out of the Mod X. Some wonderful sounds the weave together in interesting ways. Will definitely have a repeat listen.

William Bodily An exploration in the capabilities of technology through the beauty, humor and chaos it holds. A fresh and fun listen.

Steve Yates Despite this being a change in tech, it’s not as much of a change in sound. Still getting layers of harmony, melody interspersed with glitch. Loads to enjoy. Favorite track: The Neck Of The Hourglass.

Gary Bouch Listening to this on my IEMs with the laptop volume too loud! Definitely recommended!! Hearing parts I've never heard before - there's so much to miss in Steve's music when it's just on in the car or at home... 'in the background'. Music worth paying attention to :-) Favorite track: Better Living Through Technlogy.

“It is only when they go wrong that machines remind you how powerful they are.” - Clive James

This started out as a single track release, and is now, I think, finished as a four track album. These are the first 'released' things I've recorded with my new pedal/production set-up, centred around the MOD Devices DuoX. For those of you that aren't musicians, this focus on the tech that makes the music may seem a little off-balance - like it's the music that matters, right? But just as the piano suddenly brought dynamics to keyboard music in the early 1700s, so new tech affordances make new kinds of musical imaginings possible. Sometimes these have implications for specific sounds, other times for arrangements, and for me there's a big ongoing exploration of how music evolves. Looping technology exists as a dialectic of sameness and difference. the audio is being repeated but even if you do nothing to it, hearing a thing again is different because you've already heard it so anticipation is now part of the experience... But as soon as you transform it you have aspects that are the same and new things that are happening to it.

So here's a curious journey through some of the transformative possibilities of this new set-up. Playing and recording without the Looperlative is REALLY strange. It's been the physical embodiment of how my brain conceives looping for the best part of 16 years, so removing that is like learning to play bass left handed. But it opens me up to some new possibilities too... So here we have the sameness and difference of new technologies explored for the first time. And hopefully the results point away from the tech, rather than burrowing into it... After all, who wants to listen to a tech demo, right? :)

The second track is called The Neck Of The Hourglass because today (Feb 7th) is the birthday of J Dilla - arguably the greatest hip hop producer and beat maker of all time, and an immeasurably huge influence on how and why I make music with beats. His influence is all over the place in pop music and jazz, and for me, he's definitely the neck of the hourglass through which everything creative flows. Whatever I was doing before is filtered through Dilla before it arrives at where I am now... So Happy birthday Dilla, I'm sorry I never got to meet you when you were alive (J Dilla, 7/2/74 - 10/2/06)

Track 3 is called ReWilding, because here the post-processing on the loops immediately sounded like nature encroaching on an otherwise human-technological space... The relentless return to the wild that we expend so much energy resisting and comparatively little brain space trying to understand.

The last track, A Dangerous Master is inspired by the quote below, and follows a template I stumble upon from time to time when dystopia floats to the surface as a leading inspiration for improvisation...The journey from calm to calamity and on into destruction, followed by some kind of hope, some kind of dawn, some kind of future, is a narrative of redemption that swirls around much of how I see the world. As much as I want a redemptive arc to my own life, I want it for the world, for the West in a post Brexit/post Trump landscape, but acknowledging the collapse and the destruction we've wrought comes first. For other examples of this set of inspirations, see If They Had One and the title track from The Arctic Is Burning.

“Technology is a useful servant but a dangerous master.” - Christian Lous Lange

All of the things - Steve Lawson

Recorded at Lawsound Studios (AKA the corner of my bedroom) Feb 6th-8th 2020.